Follow @dlolleyor
Visit NFL from the sidelines on the new Observer-Reporter site: http://www.observer-reporter.com/section/BLOGS08

Linebacker James Harrison took to his Instagram account Saturday to announce that he is still attempting to decide whether he wants to play for Tennessee or Pittsburgh in 2015.


“The opinions of my support team are split, but for me, my love for the man who both started, and made my career what it is, is undeniable,” Harrison wrote. “There are no words that I can find that would do justice for everything Dick LeBeau has done for me & my career and nothing can compare to that!
“I also have a great amount of love for Steelers Nation & the Steelers organization. I’m going to pray on this and let God guide me in the right direction.”
In reality, it would appear Harrison is really trying to decide whether he wants to have a chance to be a starter or backup in 2015.
Tennessee signed free agent Brian Oropko and re-signed Derrick Morgan in free agency. Though Oropko has an injury list during his career that suggests he might not make it through an entire season unscathed, Harrison likely would be No. 3 behind those two guys.
In Pittsburgh, Harrison would be the starter on the left side, likely ahead of a high draft pick.
Harrison's love of LeBeau is real. Of this there is no doubt.
But he would also have to leave his family, which lives in Pittsburgh, next year if he chose to play for the Titans.
Those are the reasons why I think he'll wind up in Pittsburgh.
And then there is this: 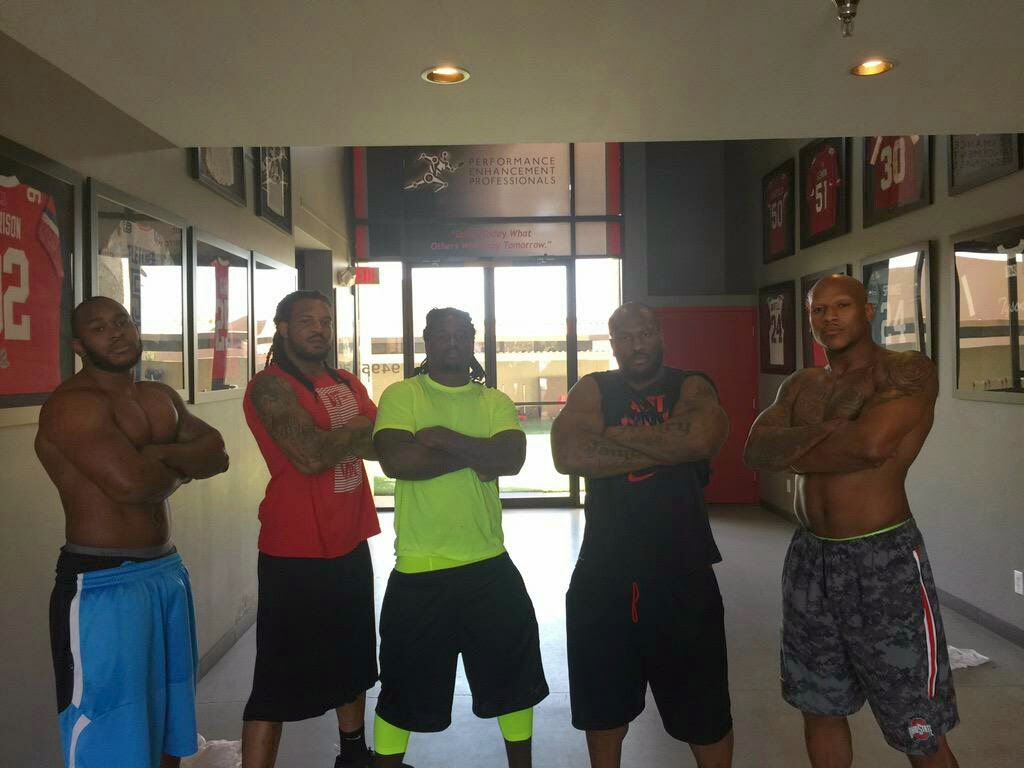 Vince Williams, left, posted this on his Twitter feed this week. It's a photo of himself, Jarvis Jones, Sean Spence, Harrison and Ryan Shazier in Arizona, where they are working out as a group.

That doesn't appear to be a guy who is thinking about playing somewhere else next year.

@ It's good that the young linebackers are working out with Harrison, whose workouts are legendary. That can only help them in the long run.

@ Per Gil Brandt, LSU corner Jalen Collins had foot surgery on Thursday but should be ready to go for mini-camp.

That's still troubling for teams looking to draft the Collins in the first round. Do you take a guy who just had foot surgery and hope it's not something serious?

This suggests Harrison is sitting on two offers? Im sure one or both are interested but I doubt either have offered him anything yet. Probably trying to grease the skids.

Have to chuckle at Jones.

He's a moron if he picks Tennessee, even if he doesn't see the field for the Steelers.

OT: will I be faced with the decision to get a new TV if the Steelers pass on Marcus Peters only to see him be selected by the Ratbirds as both McShay & Kiper are projecting?

I don't think we "needed" Robinson. But we do "need" a starting CB.

Dale, im not impressed whatsoever with this draft class.

I think we should just go best CB available no matter who it is or what is wrong with them.

Theoretically a group of Moats, Jones & Harrison could be mediocre.

I don't believe we have even mediocrity in our secondary.

I don't know enough about Sharko, but I thought Blake looked good last year. Mitchell & Allen are both bums.

I'm not so sure I would trust Peters. College aren't in the habit of kicking great players off the team for no good reason.

So what's he wana do? Follow LeBeau just to sit the bench? Coach Dick isn't even the D Coordinator

Worst case scenario is we have a legit shutdown CB for 3 years, and we let him walk like Wallace.

I doubt he'd act like the tuffest guy in town with real men like Harrison and Shazier around.

If Peters is off selling drugs and committing crimes then I question his character.

Sideline arguments with some no-name coach(Sark? You mean the guy who argues with his boys at USC?) ... No that doesn't bother me.

Peters was prob like, "coach you suck. Put me in. We suck."

And guess what? He was right. Washington does suck.

PS: Marcus Peters is good friends with bad boy Marshawn Lynch.
I personally think that the NFL was made for minds of all kinds, so long as they follow the law.

We have Sloppy Jones and Old Man Moats.

I'll bet anyone here $100 each they don't draft Marcus Peters.

Its just not happening.

J jones needs to drink from the bottle, boy he looks like a kid with no mass next to those guys..

Uh, yes, LeBeau is in charge of the defense in Tennessee.

Friends with the same Marshawn Lynch who was involved in a hit-and-run in Buffalo and also plead guilty to violating concealed weapons charges? And then was arrested later for a DUI? That's the guy you're using as a character reference?

One false step is a strike, three or four as Lynch has had, well . . .

Meh, all I care about Jarvis Jones is that he plays well. We're rooting for a Super Bowl not Mr. Olympia. Maybe he spends more time on Olympic lifts than arm curls and if he does then good for him!

We did draft Mike Adams.

Don't worry we got Kearney. Remember it was exposed that the steelers football players are jackasses and no better than other organizations off-field behavior.

I wouldn't be concerned about anyone's character with Kearney in our corner.

The steeler way is a lie. I think we need a cornerback.

5 guys posing, yet one stands out as a "poser".

All have their arms crossed, 4 have their hand tucked naturally under the elbow. But one has his fist behind his bicep. And only one is kinda flexing that bicep. And pointing it at the camera at it's broadest angle.

Maybe he'd be better off working out with Hans and Franz.

Oh come on now! How many hands do you see in that picture? They're all doing the same thing. The Jarvis Jones anti-bandwagon is getting ridiculous. Maybe he'll have a good season, maybe he won't but let's evaluate that when we see them play. You don't need big arms to sack the QB or get away from blockers. Everyone bashed Polamalu his first year, they bashed Timmons; whine, whine, whine. Ziggy Hood should have been a Pro Bowler if posing mattered.

What is with the shots at Jack Kearney? Every team in every sport has current or former law enforcement guys who head their security. Every single one.
And the SI hit piece was filled with inuendo but no charges that anything improper had happened. In my opinion, SI should have been embarrassed to run it.

As for Mike Adams, a positive marijuana test before the combine wasn't the smartest thing in the world but it hardly rises to the level of hit and run, DUI or weapons charges.

Again, college teams aren't in the habit of throwing really good players off the team unless they are huge pains in the butt. I'm sure the Steelers will do their due diligence with Peters, but its a huge red flag for me.

In other news, Harrison signed a two year deal. Yay!

Seems you're the only one throwing a hissy. How could you know i'm talking about Jones anyways? just pointing out what's plain. His is the only hand up behind his bicep. And look at the 3 muscles that make up the triceps. He is flexing, not in a relaxed state like everyone else. I dont especially care. I just think it's funny. Can't really blame him. Kind of like Olive Oil wearing a push-up bra on a Victoria's Secret runway show.

I'm not as experienced in admiring physiques so I'll defer to your keen eye. Hopefully he'll pick up some good habits training with Harrison.

I was out of line.

But I think there is a point to be made that guys like Mike Vick(pt2), Ogltree, Jimmy Smith, Pryor and Burfict have stayed out of trouble,
while a simple marijuana user like Mike Adams starts fights on south side.
Aaron Hernandez: clean slate on draft day.

I'm just saying, it's football. Talent should come before speculation.

let me handle this one for you with my best Dale impersonation:

They're not drafting Peters at 22. Period.

Dale if you're saying that the injury might make Collins slide to the Steelers' pick in the 2nd...I'd like that a lot. I do not understand all the love for Alex Carter.

Joe jones- Aaron Hernandez dropped to the 4th because of character concerns.

I don't get the Jarvis jones bashing. He's a second year player that was in the process of busting out prior to a fluke injury. In less than 3 games he had 18 tackles, 2 sacks and a forced fumble. Let's give the guy a chance.